Albert was born on May 26 1923 in De Bilt Holland as the son of (father unknown) and Rosa Von Lima-Bouma (German) in a Roman Catholic family in De Bilt. His mother was remarried on July 25 1945 after a divorce.

It is not known when he or his family emigrated to Canada, but he worked as an auto mechanic apprentice in Vancouver, when he enlisted on October 1942. His basic training was at the 112 CABTC Chilliwack BC, and was finished in February March 1943 at the A.16 in Calgary.

He went overseas to the UK on May 22 1943 and he was taken on strength with the Canadian Scottish Regiment, the Monk’s Common in Sussex and he became in active service on June 19 1943.

He landed on June 6 1944 during D-Day in Normandy in the D Company and survived this and the heavy losses by his regiment during the battle of Putot en Bessin (France)  on June 8 and 9. He was in the last weeks of the war with the ‘A’ Company in Wagenborgen Groningen.

Albert was killed in action there on Monday April 23 age 21 and he was temporarily buried in Siddeburen and he was on February 15 1946 reburied in Holten.

His medals were: the 1939-45 Star, the France Germany Star, the Defence Medal, the War Medal; the CVSM & Clasp. 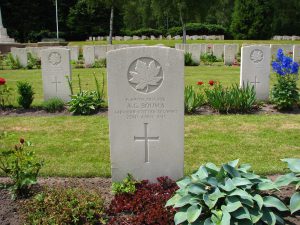