James was born on June 1 1914 in Fort George Scotland as the son of James McHaffie-Gow and Jessie McHaffie-Gow. His parents were married in 1912 in Glasgow Scotland. His father died on January 13 1915 in France in WW 1 and Jessie remarried after this war as Mrs. Hirsch. He was  married on May 10 1941 in Truro Nova Scotia with Bertha Mary McHaffie-Gow, of Rounthwaite, Manitoba. Their daughter was Lois Marilyn McHaffie-Gow. His half-sister was Rosemary Hirsch.

He was a carpenter and member of the Church of England.

He enlisted on September 13 1939 in Victoria British Columbia and he went on September 2 1941 overseas to the UK .

James died of wounds on Wednesday October 14 1942 age 28 due to an accident with explosions as an instructor at an exercise in England and he  was then buried at the Brookwood Military Cemetery.

At his headstone: IT’S IN MY HEART TO SPUR ME ON, MY FAITH AND COURAGE TO RENEW THE THOUGHT OF YOU 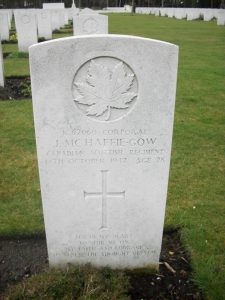