Leslie was born on December 2 1920 in Perth Ontario as the son of Norman H. Tetlock (deceased), and Minnie A. Tetlock, of Perth. His parents were married on September 14 1910 in Perth. His brothers were Percy and Lindsay Tetlock (also in the army overseas and in Italy) and his sister was Mrs. Gladys Hill.
He was a shoe maker and member of the United Church. He played softball, hockey, rugby and other sports and was reading fiction. He went to movies, dancing and usual social evenings.
He enlisted on March 17 1942 in Perth and he went overseas to the UK on June 2 1944 and he went thereafter as reinforcement to France on July 30.
Leslie was killed in action on Tuesday August 15 age 23 in the A Coy near Falaise and he was temporarily buried 2 km’s East of Soulangy and reburied on May 17 1945 in Bretteville S/Laize.
At his headstone: JESUS SAID:- “AND WHOSOEVER LIVETH AND BELIEVETH IN ME SHALL NEVER DIE”
His medals were: 1939-45 Star; France Germany Star; War Medal; CVSM & Clasp. 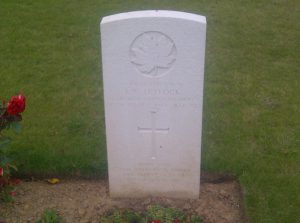