Otto was born on January 23 1925 in Styal, Alberta, as the son of Amandus and Frieda Burian, who were immigrated from Germany to Canada just a month before WW 1.
Otto was the youngest of the 7 brothers and three sisters.

When he was five the family removed to British Columbia where they finally lived in Maillardville, an area near New Westminster, now part of the town Coquitlam near Vancouver.

He was a core man and member of the United Church.

He liked softball, playing guitar, was interested in cars, and spent time in in the Yukon area with his brothers and sisters and worked as a core man in a foundry before he enlisted on October 21 1943. Two of his brothers were also overseas and survived happily.

The service file of Otto is as follows:

Otto was wounded because of a shrapnel in his back on August 15 1944. He was taken on strength on August 29 again and was killed in action on Wednesday March 28 1945 age 20 in the D Coy near Emmerich Germany. He was temporarily buried in Vrasselt near Emmerich and thereafter on February 13 1946 reburied in Groesbeek.

At his headstone: IN THE HEARTS OF THE ONES WHO WILL NEVER FORGET HIM. MOTHER AND FATHER 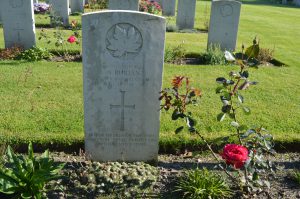