Peter was born on March 20 1917 in Fraser Lake British Columbia as the son of Alec (deceased in 1936) and Christine Thomas, of Fraser Lake. His parents were married in 1913 in Hazelton British Columbia. Christine remarried as Mrs. Casmere and his half-brother was Jasper Casmere and his deceased sister Sarah Thomas.
He was a trapper and member of the Roman Catholic Church. He was a First Nation who spoke English and Indian.
He enlisted on July 11 1940 in Vanderhoof British Columbia and he went on March 29 1942 overseas to the UK and he went thereafter on June 6 1944 to France for the D-Day landing. He was seriously wounded in action on March 29 1945.
Peter died of these wounds on Friday March 30 age 28 in the B Coy near Emmerich Germany during the battle of the Rhineland. And he was temporarily buried in Bedburg Hau Germany and he was then on September 24 1945 reburied in Groesbeek.
At his headstone: ON THAT BRIGHT IMMORTAL SHORE WE SHALL MEET TO PART NO MORE
His medals were: 1939-45 Star; France Germany Star; Defence Medal; War Medal; CVSM & Clasp. 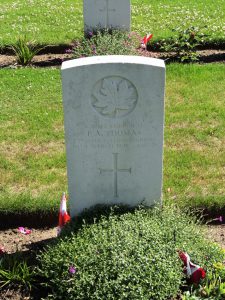