Stanley was born on February 26 1920 in Arcola Saskatchewan as the son of Jack (Scottish) and Maude Seivewright (English). His parents were married on May 4 1915 in Arcola. He was married on March 18 1940 in Winnipeg with Marie Jeanne Seivewright, of Gravelbourg, Saskatchewan. Their children were Gail Louise Rose and Stanley Robert Paul Seivewright. He was the brother of Alexander (also in the army), Geoff (RCAF), Keith and Private John (Jack) Edward Seivewright, Princess Patricia’s Canadian Light Infantry who was also killed on September 1 1944 in Italy and he was buried there at the Montecchio War Cemetery grave 3-F-5. And his sister was Doris May Seivewright and his other brother Earl already died earlier.
He was a labourer and member of the Presbyterian Church. His hobbies were fishing and hunting. His interests were hockey, softball, bowling, boxing, swimming and reading a little.
He enlisted on September 28 1939 in Winnipeg and he went overseas to the UK on December 22 1941 and he returned to Canada on May 1 1943. He disembarked as a corporal the UK again on April 2 1944 and he went thereafter as reinforcement to France on June 6 1944 for the D-Day landing.
Stanley was killed in action on Tuesday August 15 age 24 in the D Coy near Falaise and he was temporarily buried 2 km’s East of Soulangy and reburied on May 17 1945 in Bretteville S/Laize.
At his headstone: IN LOVING MEMORY OF MY BELOVED HUSBAND. YOUR LOVING WIFE, GAIL AND STAN.
His medals were: 1939-45 Star; France Germany Star; Defence Medal; War Medal; CVSM & Clasp. 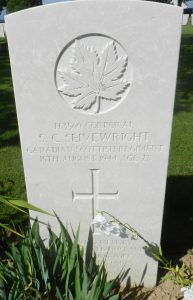