Stanley was born on May 7 1910 in Adanac Saskatchewan as the son of James (Irish) and Margaret Smith (English) and both deceased. His parents were married in 1907 in Emerson Manitoba. His brothers were Kenneth D. (also in the army), James Earl and Andrew Emerson Smith (also in the army) and his sister Mrs. Florence Mary Simmons was his executor.
He was a truck driver and member of the United Church.
He enlisted on May 22 1940 in Victoria British Columbia and he went on September 2 1941 overseas to the UK and he went thereafter on June 6 1944 to France for the D-Day landing.
Charles was killed in action on Saturday June 10 age 34 in the B Coy near Putot en Bessin and he was temporarily buried thereafter somewhere and reburied on May 3 1945 in Beny S/Mer.
At his headstone: A TRUE FRIEND A SON MOST DEAR A LOVING BROTHER LIETH HERE. GREAT IS OUR LOSS
His medals were: 1939-45 Star; France Germany Star; War Medal; CVSM & Clasp.

His name is ast the monument in Putot en Bessin. 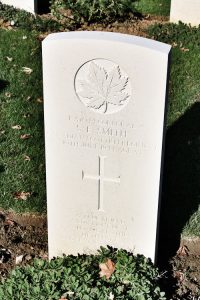