William was born on February 12 1921 in Chatham Ontario as the son of Albert Edward and Elizabeth Garner of Chatham. He was married on July 19 1941 in Calgary with Winifred (Winnie) Garner and their daughter was Mary Eunice Garner. Winifred remarried after the war as Mrs. Fishwick.
His profession was a cabinet maker and he was member of the Nazarene Church.
He enlisted on June 25 1940 in Fairview Alberta and he went overseas to the UK on September 2 1941 and he went thereafter on Tuesday June 6 1944 to France for the landing on D-Day.
William died of wounds due to a mine accident on Saturday July 1 1944 age 23 near Rots Le Hamel and he was temporarily buried in Le Hamel and he was reburied on February 5 1945 in Beny S/Mer.
At his headstone: WEEP NOT FOR ME THE STRIFE IS O’ER; THE BATTLE’S WON, O LAY ME DOWN TO REST
And his medals were:1939-45 Star; France Germany Star; Defence Medal; War Medal; CVSM & Clasp. 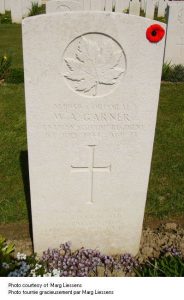