William was born on June 5 1920 in Fernie British Columbia as the son of William (Dutch) and Christine (Scottish) Van Buskirk nee Nicholson of Fernie. He was married with Elizabeth F. Van Buskirk nee Forrest Grant, of Port Inverness Scotland. Their adopted daughter was Margaret Lorna Van Buskirk. He was the brother of Mrs. A.R. MacLennan, Mrs. J.P Session, Grace, Patricia and Archibald Van Buskirk.
He was a road cutter and member of the United Church.
He enlisted on September 14 1940 in Cranbrook British Columbia and he went on April 20 1941 overseas to the UK and he went thereafter on June 6 1944 to France for the D-Day landing. He was wounded in action on June 8 and was evacuated then to an English hospital. He disembarked on September 1 France again.
William was killed in action on Wednesday March 28 1945 age 24 in the C Coy near Emmerich Germany during the battle of the Rhineland. And he was temporarily buried in Vrasselt Germany and he was then on February 13 1946 reburied in Groesbeek.
At his headstone: THE PATH OF DUTY WAS THE WAY TO GLORY ETERNAL HONOUR TO HIS NAME
His medals were: 1939-45 Star; France Germany Star; Defence Medal; War Medal; CVSM & Clasp.
The Province of British Columbia named Mount Van Buskirk located east of Brule Creek at the head of Weigert Creek, in memory of William Earle Van Buskirk. 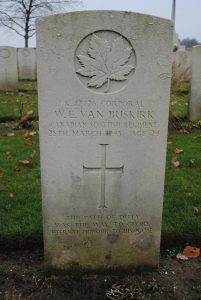