James was born on January 15, 1916 in Kamloops, British Columbia as the son of Stanley James and Alma Eileen Harling of Kamloops.

He was a reporter and he was member of the Church of England. He spoke French.

James was killed in action on Sunday July 9 1944 age 28 in the C Coy near Cussy and he was temporarily buried there and he was reburied on February 7 1945 in Beny S/Mer.

He was just taken on strength on July 8 to the Canadian Scottish Regiment. 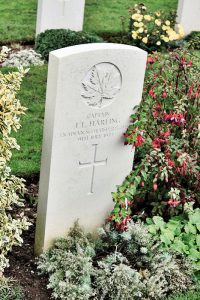