Barton was born on December 23 1915 in Winthorpe Saskatchewan as the son of John William and Alice Mawer (both English) of Winthorpe. He was married on November 14 1939 in Winthorpe with Kathrien Mawer. They had a son Russell Leonard Mawer. Kathrien remarried after the war as Mrs. Hansen.
He was a labourer and member of the Church of England.
He enlisted on November 5 1942 in Calgary and he went on June 18 1943 overseas to the UK and he went thereafter on June 6 1994 to France for the D-Day landing.
Barton was killed in action during a night patrol on Saturday November 25 1944 age 28 in the C Coy near Groesbeek. And he was temporarily buried in Nijmegen and he was then on August 8 1945 reburied in Groesbeek.
His grave was thereafter in 1946 adopted by a young lady of Nijmegen.
His medals were: 1939-45 Star; France Germany Star; Defence Medal; War Medal; CVSM & Clasp. 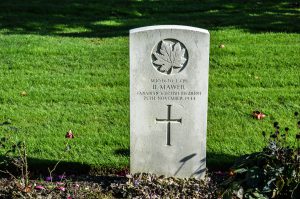