Bernard was born on October 28 1921 in Calgary as the son of John Peter and Mary Derrick Lurges (both Irish and deceased). He was married on December 26 1942 in Calgary with Jean Isabelle Ann Lurges, of Toronto. His brother was Gerald Derrick Lurges and his sisters were Rosemary Aileen and Geraldine Mary Lurges.
He was a truck driver and mechanic and member of the Roman Catholic Church. He enjoyed outside sports and his hobbies were carpentry and mechanic.
He enlisted on January 6 1943 in Calgary and he went on June 24 overseas to the UK. And he went thereafter on June 6 1944 to France for the D-Day landing.
Bernard was killed in action on Monday October 16 age 22 in the A Coy near the Leopold Canal and he was temporarily buried in Maldegem and on July 23 1945 reburied in Adegem.
At his headstone: THERE IS A LINK DEATH CANNOT SEVER LOVE AND REMEMBRANCE LAST FOR EVER
His medals were: Medal 1939-45; France Germany Medal, Defence Medal; War medal; CVSM & Clasp. 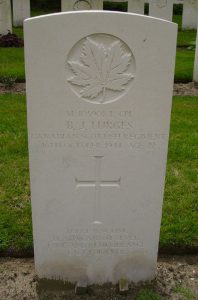