Harvey was born on May 9 1920 in Armstrong British Columbia as the son of Albert Ivan and Viola (deceased in 1933) Warner, of Armstrong (both Americans). They were married on December 15 1897 in Berwick Iowa USA. He was married with Margaret Ivy Warner nee Young, of Auckland England. She remarried after the war as Mrs. Foulis. His brothers were Theron Malton, Ronald Jay, Elmer Ivan (1928), Albert Edgar (1911) and Walter William Warner (1944) Note the last three were thus all deceased. His sisters were Esther Irene McNair, Ada May Warner, Ruth Anna Mills, Viola Connatty and Margaret Evelyn Warner.
He was a bookkeeper and member of the Church of England.
He enlisted on December 6 1939 in Kamloops British Columbia and he went on September 2 1941 overseas to the UK and he went thereafter as reinforcement on June 10 1944  to France.
Harvey was killed in action on Monday February 19 1945 age 24 in the B Coy at the Moyland Wood during the battle of the Rhineland. And he was temporarily buried in Bedburg Hau Germany and he was then on September 19 1945 reburied in Groesbeek.
At his headstone: NON SIBI SED ALLIS
His medals were: 1939-45 Star; France Germany Star; Defence Medal; War Medal; CVSM & Clasp. 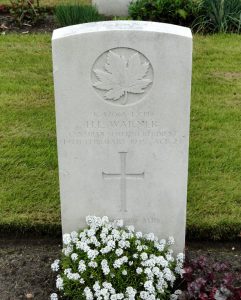