John was born on 24 March 1921, at Lewis in Sussex, England as the son of Florence Gladys Rumney, of Port Alberni, British Columbia. After completing his Grade 12 education, he became a logger on Vancouver Island and enlisted in the 1st Bn. Of the Canadian Scottish Regiment on 27 June 1940 in Victoria BC. As early member of the Signal Platoon, he arrived in the UK with the unit on 2 September 1941 and improved his skills on courses and exercises in England and Scotland, before landing in France on 6 June 1944 during D-Day. While overseas he carried on his boxing’ career, winning the championship of the 3rd Canadian Scottish in the Albert Hall, London England.

On 13 June 1944 he was appointed L/Cpl. and served the battalion in operations across Northern France, Belgium, Holland and Germany, except for two brief absences while ill. At Wagenborgen he was attached to ‘D’ Coy during the first attempt to liberate the town, and John died, 24 years old, of serious wounds received on Saturday April 21 1945.  He was temporarily buried in Siddeburen and on February 15 1946 reburied in Holten

At his headstone:  UNTIL THE DAY BREAK AND THE SHADOWS FLEE AWAY” REMEMBER, DEAR A MOTHER’S LOVE WILL NEVER DIE 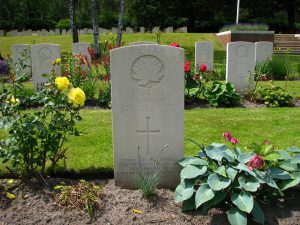