Max was born on November 4 1910 in Stirling Alberta as the son of August and Anna Bossert (both deceased). He was married on October 24 1934 in with Ardella Bossert, of Magrath, Alberta. Their son was Hugh Lavoy Bossert and their daughters were Maxine June, La Bena Ann and Roe Eta May Bossert. Ardella remarried after the war as Mrs. Sam Bennett.
He was a farmer and member of the Presbyterian Church.
He enlisted on February 25 1942 in Fort Macleod Alberta and he went on September 9 1941 overseas to the UK and he went thereafter on October 6 1944 to France.
Max was missed on December 20 during a patrol at the Waal Flats in the C Coy and he was captured then and died thereafter while prisoner of war in Germany on Sunday December 31 1944 age 34. And he was temporarily buried in Bedburg Hau Germany and he was then on September 6 1945 reburied in Groesbeek.
At his headstone: HE LOVED HONOUR MORE THAN HE FEARED DEAT
His medals were: 1939-45 Star; France Germany Star; Defence Medal; War Medal; CVSM & Clasp. 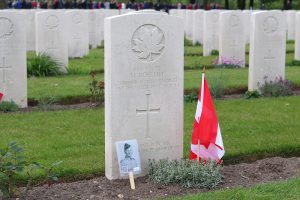