Percy was born on October 28 1899 in Fort Saskatchewan Alberta as the son of William Lofthouse Peacock and Mary Alice Peacock nee Barge (both English and much earlier deceased). They were married approximately in 1882 West Eden England. His brother William George Peacock was his next of kin and his sisters were Mrs. Dorothy Emily Grace Pollock, Mrs. Margaret Alice Bing and Agnes Sorrell Peacock.
He was a hunter and member of the United Church. He played baseball and read mining text books and various other subjects.
He enlisted on April 4 1942 in Vancouver and he went on July 30 overseas to the UK and he went thereafter on June 6 1944 to France for the D-Day landing.
Percy was killed in action on Wednesday February 21 1945 age 45 at the Moyland Wood during the battle of the Rhineland. And he was temporarily buried in Bedburg Hau Germany and he was then on September 20 1945 reburied in Groesbeek.
His medals were: 1939-45 Star; France Germany Star; Defence Medal; War Medal; CVSM & Clasp. 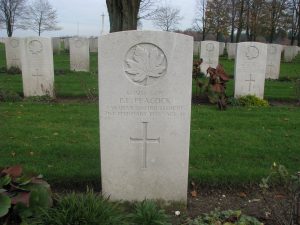