Stanley was born on March 27 1920 in Victoria, British Columbia as the son of William (deceased in 1942) and Margaret Emily Kirchin (both English), of Victoria. His parents were married on August 3 1915 in England. His sisters were Patricia Gladys Kirchin, Mrs. Ralph Churchill, Olive and Emily Florence Kirchin.
His profession was a labourer and he was member of the Church of England.
He enlisted on March 1 1940 in Victoria and he went overseas to the UK on September 2 1941 and he went thereafter to France for the D-Day landing on June 6 1944.
Stanley was killed in action on Friday June 9 age 24 in the A Coy near Putot en Bessin and he was temporarily buried there and on January 18 1945 reburied in Bretteville S/Laize.
At his headstone: IN LOVING MEMORY OF A DEAR SON AND BROTHER
His medals were: 1939-45 Star; France Germany Star; War Medal; CVSM & Clasp. 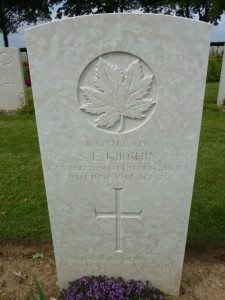