William was born on September 9 1912 in Winnipeg as the son of Henry Edmund and Catherine Beatrice Knight (both English) of Chemainus, British Columbia. His parents were married on January 26 1912 in Winnipeg. He was married on June 15 1938 in Nanaimo British Columbia with Mabel née Thorneycroft Knight, of Nanaimo. They had one daughter Mabel Joan Knight. His bothers were Alfred Eric (also overseas in the same regiment), Stanley Ronald, Leslie Augustine (also overseas in the same regiment) and Harold Gard Knight (also overseas in the Canadian Army). His sister was Mabel Jessie Jean Knight.
His profession was a lumber man and he was member of the Church of England.
He enlisted on September 7 1939 in Nanaimo and he went overseas to the UK on September 2 1941 and he went thereafter to France on June 6 1944 in the first assault wave during the D-day landing.
William was killed in action on Saturday July 8 age 31 in the C Coy near Cussy and he was temporarily buried there and he was reburied on February 7 1945 in Beny S/Mer.
At his headstone: GREATER LOVE HATH NO MAN
And his medals were:1939-45 Star; France Germany Star; Defence Medal; War Medal; CVSM & Clasp. 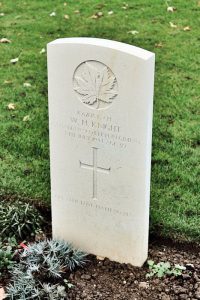