Robert was born on July 29 1915 in Kiev Ukraine, Russia as the son of Arthur Routledge and Dora Millar (deceased) and both English, of Ottawa. His parents were married in August 1913 in Drohobycz Poland. His stepmother was Audrey Millar. His brother was Douglas Arthur John Millar (RCAF overseas too). He left all his properties after his death to Mrs. Gwen Adams.
His profession was a sawmill worker and he was member of the Church of England and he spoke French.
He enlisted on July 9 1940 in Penticton British Columbia and he went overseas to the UK on September 2 1941 and he went thereafter to France on June 6 1944 for the D-Day landing.
Robert was killed in action on Friday July 16 age 28 in the Sp Coy near Caen and he was temporarily buried near a ‘Fabrique des meubles’ and he was on April 10 1945 reburied in Bretteville S/Laize.
At his headstone: GREATER LOVE HATH NO MAN
And his medals were: 1939-45 Star; France Germany Star; Defence Medal War Medal; CVSM & Clasp. 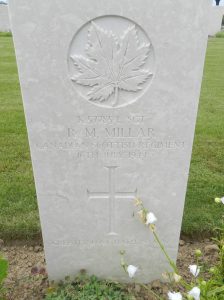