Alan was born on April 6 1920 in Victoria British Columbia as the son of Nora Mary Elizabeth Hudson of Vancouver. His father was already deceased.
He was an accountant and he was member of the Church of England.
He enlisted on July 30 1941 in Vancouver and he went overseas to the UK on May 12 1942 and he went thereafter on June 13 1944 as reinforcement to France.
Alan was killed in action on Sunday July 9 age 24 in the D Coy near Cussy and he was temporarily buried there and he was reburied on February 8 1945 in Beny S/Mer.
And his medals were:1939-45 Star; France Germany Star; Defence Medal; War Medal; CVSM & Clasp. 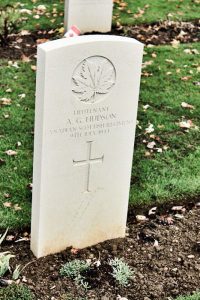