Ian was born on March 23 1920 in Vernon British Columbia as the son of Dugald and Catherine MacDonald, of Courtenay, Vancouver Island, British Columbia. His parents were married on September 12 1917 in Caterham Valley England. His sisters were Iona Mary (in the army too) and Sheila Catherine MacDonald.
His profession was a bridge builder and he was member of the Roman Catholic Church.
He enlisted on September 14 1939 in Courtenay and he went overseas to the UK on September 2 1941 and he returned on July 18 1942 to Canada  for his training for officer. And he went as a lieutenant on July 14 1943 overseas back to the UK. And he went thereafter to France on June 6 1944 for the D-Day landing.
Ian was killed in action on Saturday June 10 age 24 in the B Coy near Putot en Bessin and he was temporarily buried there and he was on January 18 1945 reburied in Bretteville.
At his headstone: ETERNAL REST GIVE TO HIM, O LORD; AND LET PERPETUAL LIGHT SHINE UPON HIM. R.I.P.
His medals were: 1939-45 Star; France Germany Star; Defence Medal War Medal; CVSM & Clasp. 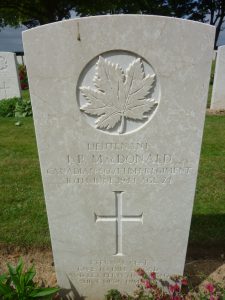