Michael was born on April 6 1918 in North Vancouver as the son of James ( deceased in 1941) and Amy Clark MacKenzie of North Vancouver. They were married on June 6 1912 in Vancouver. His brother was Peter Scott and his sister Margarita Agnes Clark MacKenzie.
He was a clerk and member of the Presbyterian Church. He spoke English and French.
He enlisted on July 1 1940 in North Vancouver and he went on June 22 1941 overseas to the UK and he returned on May 1 1943 to Canada for his officer’s education and he disembarked as a lieutenant the UK on February 24 1944 again. And he went thereafter on July 3 to France and he was wounded in action on September 7 1944 and he was evacuated then to an English hospital and he went on November 10 to NW Europe.
Michael was killed in action on Saturday November 25 1944 age 26 in the C Coy near Groesbeek. And he was temporarily buried in Nijmegen and he was then on August 8 1945 reburied in Groesbeek. His grave was on July 1 1946 adopted by a man of Nijmegen.
His medals were: 1939-45 Star; France Germany Star; Defence Medal; War Medal; CVSM & Clasp. 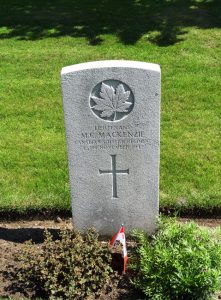