Rheal was born on April 6 1917 in Pembrooke Ontario as the son of Azarie L. and Anne Allard. He was married on October 29 1942 with Joyce Evelyn Allard, of Port Arthur, Ontario. They had a son Michael who was born on November 10 1943 in England and died on December 19.
He was a salesman and member of the Roman Catholic Church.
He enlisted on September 22 1939 in Fort William Ontario and he went overseas to Glasgow Scotland on December 31 1939 and he went on September 20 1943 back to Canada for his education of lieutenant. And he returned then to England and went thereafter to France on July 31 1944.
Rheal was killed in action on Thursday August 24 age 27 and he was temporarily buried in Orbec and reburied on July 11 1945 in Bretteville S/Laize.
At his headstone: OUR LOVED ONE IS AT REST. EVER REMEMBERED BY WIFE JOYCE, MOTHER, FATHER AND FAMILY
His medals were: 1939-45 Star; France Germany Star; War Medal; CVSM & Clasp
He served with the Canadian Scottish Regiment and the South Saskatchewan Regiment. 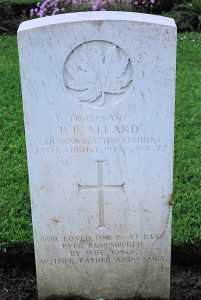