Roland was born on January 16 1919 in Toronto as the son of Francesco and Anne Isabella Nicoletti (both Italian and deceased), of Toronto. His sister Eleanor Nicoletti was his executor.
He was a draughtsman and member of the Roman Catholic Church. He spoke English and Italian.
He enlisted on September 8 1939 in Toronto and he went on September 18 1939 overseas to the UK and he went thereafter on June 6 1944 to France for the D-Day landing.
Roland died of wounds on Monday June 26 age 25 near Rots Le Hamel and he was temporarily buried in Pierrepont and reburied on February 28 1945 in Beny S/Mer.
At his headstone: REST IN PEACE
His medals were: 1939-45 Star; France Germany Star; Defence Medal; War Medal; CVSM & Clasp. 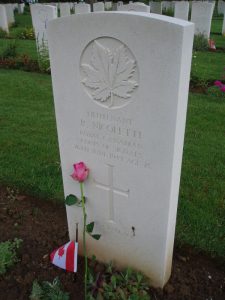