Vivian was born on January 20 1915 in Vernon British Columbia as the son of Arthur Golding Graham and Adelaine Graham. He was married on August 10 1939 with Daphne Violet Graham, of Saltspring Island, British Columbia and their daughters were Susan and Jennifer Jane Graham.
He was a truck driver and clerk and member of the Church of England. His hobbies were fishing hunting and sports.
He enlisted on September 16 1939 in Vancouver and he went on December 31 1944 overseas to the UK and he went thereafter on February 24 1945 to NW Europe.
Vivian was killed in action on Thursday March 29 age 30 in the D Coy near Emmerich Germany during the battle of the Rhineland. And he was temporarily buried in Vrasselt Germany and he was then on February 13 1946 reburied in Groesbeek.
His medals were: 1939-45 Star; France Germany Star; War Medal; CVSM & Clasp. 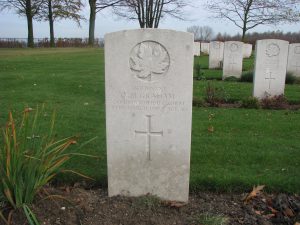