Anthony ‘Tony’ Compton Lundie was born on 20 February 1915 in Oakburn, Manitoba as the son of Cuthbert and Mrs. M. Compton Lundie of Duncan British Columbia.

After completing his High School education on Vancouver Island, he found employment as a merchant clerk. And he was member of the Church of England. His sports were tennis, rugby and fishing and he read fiction and travel magazines. He was board member and organisator of sport clubs.

On 6 Feb 45 he briefly became Adjutant, u n t i l appointed t o command ‘D’ Coy in the acting rank of Major, on 10 Feb 45. He saw service at Moyland Wood, at Emmerich, Germany and Deventer.

Anthony was k i l l e d in action on Saturday April 21 age 30 during the liberation of Wagenborgen. He was temporarily buried in Siddeburen and on February 15 1946 reburied in Holten

His name is at the monument  in Wagenborgen. 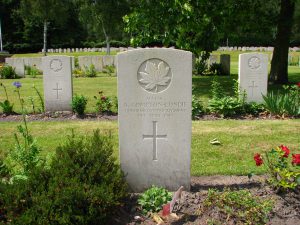