Percy (Percival) was born on November 2 1913 in Duncan British Columbia as the son of James and Mary Annie Morgan. His parents were married on May 10 1911 in England. He was married on June 18 1938 with Eileen Doris Morgan. Their children were Douglas James, Lawrence Victor, Michael Richard and Pamela Diane Morgan. Eileen remarried after the war as Mrs. Desrocher. His brothers were David Lloyd, Arthur George, Cyril Archie, Thomas James and Clifford Z. Morgan. His sisters were Edith Ellen, Ivy, Mrs. Isabel Florence Lank-nee Morgan and Bettie Annie Morgan.
He was a truck driver and mechanic and member of the Church of England. He did in his spare time: hunting, fishing, swimming, baseball, soccer, visiting shows and reading.
He enlisted on December 8 1943 in Vancouver and he went on June 25 1944 overseas to the UK and he went thereafter on July 23 to France.
Percy was killed in action on Tuesday August 15 age 30 in the B Coy near Falaise and he was temporarily buried 2 km’s East of Soulangy and reburied on May 17 1945 in Bretteville S/Laize.
His medals were: 1939-45 Star; France Germany Star;War Medal; CVSM & Clasp. 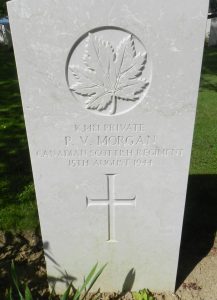