Adolf was born on September 4 1905 in Ljungby Sweden as the son of Johan Adolf and Klara Nilsson (deceased) of Sweden. He was naturalized in 1935. His best friend and next of kin was Leslie Thomas of Ardmore Alberta and Mrs. Mabel Miller of Ardmore, his housekeeper, became the executrix of his last will. Although he made his father as the one to give all his estate after his death.
His profession was a farmer and he was member of the Lutheran Church. He spoke English, Swedish and Norwegian.
He enlisted on December 9 1942 in Edmonton and he went overseas to the UK on May 22 1943 and he went thereafter to France on June 6 1944 in the A Coy for the D-day landing.
Adolf died of wounds a day later on Wednesday June 7 age 38. He was temporarily buried in Graye S/Mer and reburied on December 12 1944 in Beny s/Mer.
His medals were: 1939-45 Star; France Germany Star; Defence Medal; War Medal; CVSM & Clasp. 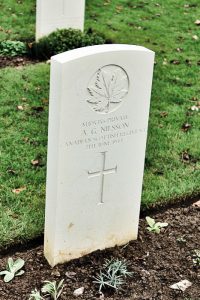