Alban was born on October 13 1922 as the son of Alphonse and Elise Babineau, of Shediac Bridge, Westmorland Co., New Brunswick.
He was a laborer and member of the Roman Catholic Church. He spoke fluently French and his hobby was baseball.
He enlisted on August 23 1943 in Edmunston NB and went overseas to the UK on August 26 1944 and went therafter  to the NW Europe on September 8.
Alban was killed in action on Saturday October 7 1944 age 21 in the B Coy near the Leopold Canal (Belgium) and he was temporarily buried in Maldegem and reburied on July 16 1945 in Adegem.
At his headstone: For God and Canada And the Freedom of Canadian liberty
His Medals were: 1939-45 Star; France Germany Star; Defence Medal; War Medal; CVSM & Clasp. 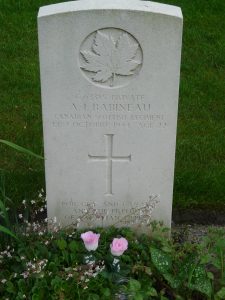