Albert was born on June 13 1905 in Answorth Notts England as the son of Mr. and Mrs. Parry (English and both deceased). His friend and next of kin was Norman Lifeso and his brothers were John and Robert Parry and his sisters were Lilian, Phebe and Elizabeth Ann Parry.
He was a lumberman and member of the Salvation Army.
He enlisted on April 12 1943 in Regina Saskatchewan and he went on December 1 1943 overseas to the UK and he went thereafter on June 6 1944 to France in the B Coy during the D-day landing. He was seriously wounded there and then evacuated to an English neuro hospital.
Albert died of these wounds on Thursday July 6 1944 age 39 and he was then buried at the Brookwood Military Cemetery.
At his headstone: GREATER LOVE HATH NO MAN THAN THIS, THAT A MAN LAY DOWN HIS LIFE FOR HIS FRIENDS

His name is too at the monument in Rots, Normandy. 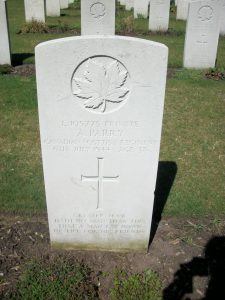