Alexander was born on July 7 1923 in Rossland British Columbia as the son of James Alex and Isabella Wright (both Scottish), of Rossland. His parents were married on September 17 1922 in Lethbridge Alberta. His sister was Margaret Wright.
He was a butcher’s apprentice and member of the Presbyterian Church. He did several sports more or less like: swimming, hockey, hunting, skiing, badminton, golf and tennis. He liked hiking, cycling and car driving.
He had already had before a training at the RCAF from August 19 1941 and he was honorable discharged on March 13 1942.
And he enlisted the army again on October 28 1842 in Trail British Columbia and he went overseas to the UK on September 20 1943 and he went thereafter on June 6 1944 to France for the D-Day landing.
Alexander was killed in action on Friday June 9 age 20 in the A Coy near Putot en Bessin and he was temporarily buried there and on January 31 1945 reburied in Beny S/Mer.
At his headstone: THE VEIL OF HIS PURPOSE OUR HANDS CANNOT REND BUT LOVE IS IMMORTAL, DEATH IS A FRIEND
His medals were: 1939-45 Star; France Germany Star; Defence Medal; War Medal; CVSM & Clasp. 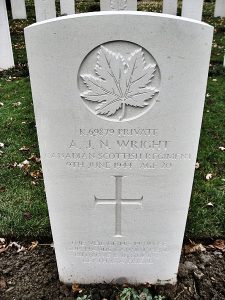