Alfred Arthur Murray was born in the small town of Fernie, BC on March 7, 1916. His widower father John James Murray (born in Scotland) had two children by his first marriage. He then married Rose Hannah Sinclair, a widow born in England, who also had two children. This blended family had three more children bringing the total to seven. Alfie, as he was known to family and friends, was the second child of the three. His half siblings were: Mary (who died in 1909), John, Margaret, George and Rosa. And full siblings Alan and Agnes. Fernie, BC is in the Rocky Mountains 938 Kms east of Vancouver, BC . At that time, the area was rich with coal deposits and untouched forests. The arrival of the Canadian Pacific Railroad gave a market to these resources and the town flourished. The 1921 Canadian Census finds John Murray, wife Rose with all seven children living in Vancouver, BC. The address given was 119 – W 44th Ave. Alfie was listed as being 5 years old. They may have come to Vancouver about 1918 for better work opportunities for the father John. Alfie’s early schooling was in the Vancouver area and he is recorded as completing one year at Fairview High School of Commerce on 1540 W. Broadway. As a young man, Alfie worked at the Vancouver Engineering Works as a Chipper. In April of 1940 Alfie attended the wedding of a work mate Charlie Arnold. It was at this wedding that he met his future wife Alice Johnson, who was a bridesmaid. In November of this same year, Alfie’s father John J. Murray was hit by an automobile on a street in Vancouver, BC . He died in hospital of his injuries a few weeks later.
Alfred Murray and Alice Johnson were married May 17, 1941. Alice’s sisters Emily and Mary bridesmaids. Wedding Picture: L-r: Gordon Round, Emily Johnson, Alfred Arthur Murray, Alice Johnson Murray, Tommy Day, Mary Johnson. By 1943, Gordon and Tommy became his brothers-in-law marrying Alice’s sisters.

The BC City Directory for Vancouver, list the newlyweds as residing at 614 – W7th. The following year they moved to 453 W. Broadway. Alfie’s only child was born in early December of 1942, and was nicknamed Teddy. On March 3, 1943 a few days before his 27 birthday, Alfie joined the local Militia in 2nd Battalion, BC Regiment D.D.C.R. Regimental number K440182. On Feb. 21, 1944 he was enrolled into the Canadian Army, regimental number K2495. Then on March 13, 1944 left for Basic Training in Orillia and then Camp Borden, Ontario. His wife Alice and baby followed him to Ontario and took a small apartment in a home at 250 W. Nottawsaga, Orillia, Ontario. Alice’s youngest sister accompanied them to Ontario, working and keeping them company. This way, Alfie got to spend any leave time with wife and child. This turned out to be the last times he would ever get to spend with his son. Following basic training, Alfie was given 15 days leave ending October 30th, 1944. Then on Nov. 24th he was shipped to England, disembarking Dec. 6, 1944. Alice, together with her sister with baby Teddy, returned to Vancouver by CP Rail. Military records note the change of address from Vancouver to Orillia and then back to Vancouver. Alfie found himself in England with the names and addresses of many of his Father-in-law’s British family. He was able to visit them all. His letters home showed just how welcome he was made by the families. He managed to have a wonderful time on any leave he was given. He wrote lots of letters home. Alice shared the news with her parents and sisters, but kept all the romantic bits to herself. These letters included plans for their future. Regular mail was extremely slow, so the family in Vancouver relished all the news they could get. The letters are still in the possession of Alfie’s son these many years later. Records obtained from Library and Archives Canada clearly show the following sequence of events: February 9, 1945 sent to NW Europe, February 10, 1945 arrived. February 23 assigned to the Regina Rifles. March 13, 1945 assigned to the Canadian Scottish. The family story is – on learning that a number of his friends from Vancouver were in the Canadian Scottish, he requested the transfer. The following information was provided to us from CFB Esquimalt Navy and Military Museum in Victoria, BC: “Transfers between units were not common, but they were not unheard of. Relationships with men in other units, or past service with the other unit were the most common reasons for this. It was rare in the period immediately after D-Day, but became a bit more common later in the war as the need for manpower became a less pressing concern. I note that your uncle was part of a group of 15 that transferred to 1 CScotR on 13 Mar, a large group for this sort of thing.”

On Tuesday April 9, 1945, Alfie volunteered to take the place of another soldier who was in sick bay. That evening while out on patrol, he was shot and killed by a sniper near Deventer at the age of 29. This telegram dated April 20, 1945 was sent to the family.
On June 26, 1946 a letter was received by the family advising them that “the remains of your husband have been carefully exhumed from the original place of internment and reverently reburied on December 17 1945 in Holten, Holland”. A letter dated April 7, 1948 forwarded to the widow Alice Murray, indicates that the grave had been adopted by a Miss F. J. Nijenhuis. She would ensure that the grave was cared for. I believe this job gradually passed to others and we are very grateful for this dedication. Some years later, a young man visited Mrs. Alice Murray to say that he was the soldier who was taken ill, and was whom Alfie had gone out on patrol for the evening he was killed. He told them what a wonderful person Alfie was and how sorry he was that Alfie was gone. Alice and Teddy lived with her parents in the intervening years. She kept in touch with the Murray family so that they would know Alfie’s son and see him grow. She remarried in 1950, adopted two children and fostered countless others. Alfie’s mother Rose Hannah Murray lived to the grand age of 102, dying in 1981. Alice, widowed again in 1977, died in 2005. Son Teddy married, had two children, four grandchildren and now, one just born Great Grandson.

We will remember them 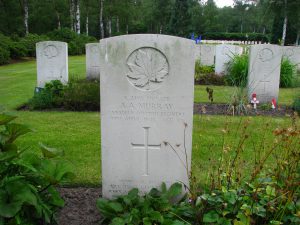