Allan was born on August 9 1921 as the son of Homer E. and Eleonora Jane Trelford of Toronto. His father was  deceased in 1935 of wounds received in WW1. His parents were married on October 1 1919 in Islington Toronto. He was married on September 5 1942 in Toronto with Mildred Verna Trelford of Toronto. His sister was Katherine Eleonora Trelford
He was a truck driver and member of the Church of England and he had mechanical hobbies.
He enlisted on November 18 1942 in Toronto and he went on July 21 1944 overseas to the UK and he went thereafter on October 7 to NW Europe
Allan (23) was officially taken on strength on Wednesday October 18 1944 to the Canadian Scottish Regiment C Coy and died of wounds on the same day during the battle of the Leopold Canal (Belgium). And he was temporarily buried on October 20 1944 near a church in Eeklo West Flanders and on May 23 1945 reburied in Adegem.
At his headstone:You have left a loneliness  The world can never fill  Our love was not for a lifetime but for eternity 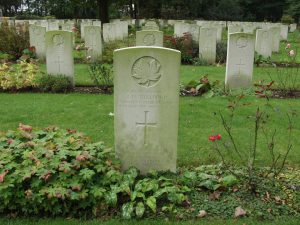