Angelo was born on July 11 1924 in Oshawa Ontario geboren als zoon van E. James Colucci en Florence R. Colucci, uit Cornwall, Ontario. Zijn vader Kwan uit Italië en zijn moeder was Canadese.
He had three sisters Marion (17), Kathaleen (13) and the youngest one was Genevieve Colucci (10 jr.).
He was a musician (guitar) and he worked too as assistant foreman of producing cloths at the Cornwall Pants & Prince Clothing. He was single and member of the Roman Catholic Church.
Angelo enlisted on September 15 1943 in Kingston Ontario and he went on June 24 1944 overseas to the UK. He went thereafter on October 17 to Belgium and he was taken on strength on October 24 to the Canadian Scottish Regiment.
He was missed first and was killed in action on Sunday February 18 1945 age 20 in the C Coy at the Moyland Wood during the battle of the Rhineland. The family received the confirmation of this on March 19 1945. He was temporarily buried in in Bedburg Hau Germany and he was on September 212 1945 reburied in Groesbeek.
At his headstone: IN LOVING MEMORY OF MY DEAR SON ANGELO LOST IN BATTLE. MAY HE REST IN PEACE 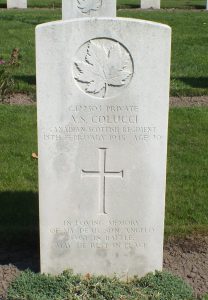