Bernard was born on June 7 1921 in Atwater Saskatchewan as the son of Bernard and Marjory Krislock, of Melville, Saskatchewan. They were married on November 18 1920 in Melville. Father Bernard came from Hegsa, Norway, to Melville to work for the CN in 1918. His brothers were David, George and Vernon Krislock and his sister was Elaine Krislock.
He was a farm hand and member of the United Church. He enlisted on June 29 1940 in Victoria British Columbia and he went on September 2 1941 overseas to the UK and he went thereafter on June 6 1944 to France for the D-Day landing.
Bernard was killed in action on Tuesday February 9 1945 age 23 at the Waal flats during the battle of the Rhineland. And he was temporarily buried in Nijmegen and he was then on April 2 1945 reburied in Groesbeek.
At his headstone: HE IS MARCHING WITH HIS COMRADES SOMEWHERE ON THE ROAD AHEAD
His medals were: 1939-45 Star; France Germany Star; Defence Medal; War Medal; CVSM& Clasp. 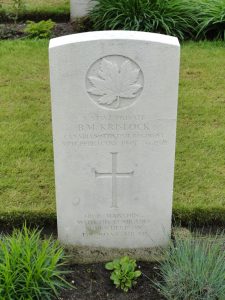