Calvin was born on July 8 1924 in Rocky Mountain House Alberta as the son of Theodore William Earl Brown (USA) and Ethel Vorise Creasey Brown (USA) of New Westminster BC. His brothers were Jesse and Robert Brown.
He was a farmer and member of the United Church.
He enlisted on October 8 1943 in Calgary and went overseas to the UK on June May 7 1944 and disembarked France on June 13. He was injured on February 18 1945 during the battle of the Rhineland (Germany) and returned to his battalion on February 25.
Calvin was killed in action on Friday April 27 1945 age 20 in the D Coy near the Leda River during the battle of Leer (Germany) and he was temporarily buried in Ihrhove (Germany) and reburied on March 12 1946 in Holten.
At his headstone: A faithful soldier’s Noble end But sadly missed
His medals were: 1939-45 Star; France Germany Star; War Medal; CVSM & Clasp. 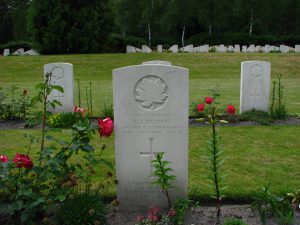