Charles was born on November 7 1917 in Hazelton British Columbia as the son of Peter Ewen Smith and Annie Smith (both Scottish), of New Hazelton, British Columbia. His parents were married in 1908 in Scotland. His brothers were John Roderick and Kenneth Smith and his sisters were Mrs. Harald Hauld, Mrs. Omar Skooner, Nellie Smith and his sister Marjorie Smith died in 1936.
He was a farmer and member of the United Church.
He enlisted on January 21 1943 in Victoria British Columbia and he went on September 20 1943 overseas to the UK and he went thereafter on June 6 1944 to France in the first assault during the D-Day landing.
Charles was killed in action on Saturday July 8 age 26 in the C Coy near Cussy and he was temporarily buried there and reburied on February 6 1945 in Beny S/Mer.
At his headstone: AT THE GOING DOWN OF THE SUN AND IN THE MORNING WE WILL REMEMBER HIM
His medals were: 1939-45 Star; France Germany Star; War Medal; CVSM & Clasp. 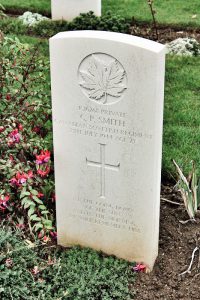