Charles was born on August 7 1923 in Newlands British Columbia as the son of Mr. (American and deceased) and Ina Hedrick (English and deceased in 1943). His brothers were Henry and Woodrow Hedrick. And his sister was Lena Rennenberg nee Hedrick and the siblings had become the next of kin of Charles Robert.
His profession was a mill hand (lumber) and he was member of the Church of England.
He enlisted on November 19 1942 in Vancouver and he went overseas to the UK on May 22 1943 and he went thereafter on Tuesday June 6 1944 to France for the landing on D-Day.
Charles was missing and killed in action on Friday June 9 age 20 in the D Coy near Putot en Bessin and he was temporarily buried there somewhere and he was reburied on January 31 1945 in Beny S/Mer.
And his medals were:1939-45 Star; France Germany Star; Defence Medal; War Medal; CVSM & Clasp.
Mount Hedrick and Hedrick Lake were named in honour of Charles Robert Hedrick  and they are located in British Columbia. 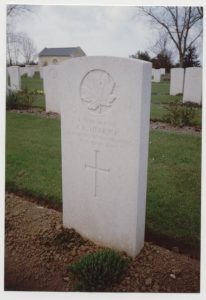