Charles was born on January 11 1918 in Kellow Manitoba as the son of Paul and Annie Newman, of Grande Prairie, Alberta. They were married on November 23 1910 in Portage La Prairie Manitoba.
His brothers were Melford Moultar, Joseph Lloyd and Percy Duncan (also in the army overseas) Newman. His sisters were Mrs. Mae Francis, Mrs. Melville Carter, Mrs. June Agnes Workman, Mrs. L. S. Dana, Mrs. G.S. Dana and Eleanor Doris Newman.
He was a farmer and member of the Presbyterian Church. He played baseball and did some hunting and trapping, swimming and read westerns and true stories. He liked social affairs, dances and shows.
He enlisted on November 17 1942 in Edmonton and he went on June 18 1943 overseas to the UK and he went thereafter on June 6 1944 to France for the D-Day landing. He was wounded then and was evacuated to an English Naval hospital and he disembarked on October 28 NW Europe again.
Charles was killed in action on Sunday February 18 1945 age 27 in the A Coy at the Moyland Wood during the battle of the Rhineland. And he was temporarily buried in Bedburg Hau Germany and he was then on September 21 1945 reburied in Groesbeek.
At his headstone: SADLY MISSED BY HIS PARENTS PAUL AND ANNIE NEWMAN AND HIS BROTHERS AND SISTERS
His medals were: 1939-45 Star; France Germany Star; Defence Medal; War Medal; CVSM & Clasp. 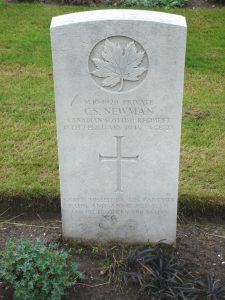