Clarence was born on September 24 1904 Osseo Wisconsin USA as the son of Samuel and Lisa Person and both deceased. His brothers were Sedley and Theodore Person and his sisters were Mrs. Victoria Harty and Mrs. Florence Hermenson of Shaunavon Saskatchewan (his next of kin). And of the USA his sisters Mrs. Selma Wicklund, Mrs. Elvina Johnson and Mrs Edith Lomen. And his cousin was Mrs. Even Hermenson.
He was a truck driver and member of the Lutheran Church. He spoke English and Swedish.
He enlisted on October 4 1940 in Fairview Alberta and he went overseas to the UK on May 22 1943 and he went thereafter on Tuesday June 6 1944 to France in the first assault wave during the D-day landing.
Richard was killed in action on Saturday July 8 age 39 in the C Coy near Cussy and he was temporarily buried there and he was reburied on February 8 1945 in Beny S/Mer.
And his medals were:1939-45 Star; France Germany Star; Defence Medal; War Medal; CVSM & Clasp. 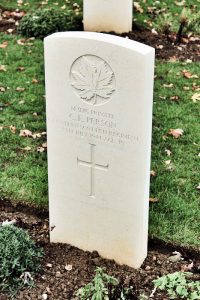