Clarence was born on November 3 1909 in Collingwood Ontario as the son of Frank and Minnie Mary Tran, of Port Coquitlam, British Columbia. His parents were married on December 24 1902 in Simcoe Ontario. His sister was Mrs. Francis MacMillan (RCAF) and his adopted sister Ellen Tran.
He was a logger and member of the Baptist Church. He liked hunting, fishing, skating and sometimes softball and he read mainly newspapers and geographical magazines. He liked shows and dancing and playing poker too.
He enlisted January 9 1943 in Vancouver and he went on September 19 overseas to the UK and he went thereafter on July 11 1944 to France.
Clarence was killed in action on Saturday October 7 age 34 in the C Coy near the Leopold Canal in Belgium and he was temporarily buried in Maldegem and reburied on July 16 1945 in Adegem.
At his headstone: MILD AND GENTLE AS HE WAS BRAVE WHEN THE SWEETEST LOVE OF HIS LIFE HE GAVE. MOTHER AND DAD
His medals were: 1939-45 Star; France Germany Star; Defence Medal; War Medal; CVSM & Clasp. 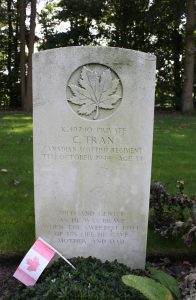