Clinton was born on April 11 1914 in Calgary as the son of Richard Copeland Hetherington and Maimie Christine Hetherington, of Calgary. He was the husband of Pauline Hetherington, of Calgary. He had four brothers: Pte Arnold, Pte Jack, both overseas, Hilliard and Wilburn Hetherington.
His profession was a fitter and he was a member of the United Church. He was well-known as a very well lacrosse player.
He enlisted on March 15 1944 in Vancouver and disembarked the UK on October 15 1944 and went thereafter to NW Europe on December 30 1944. He was taken on strength with the Canadian Scottish Regiment on January 6 1945.
Clinton was killed in action on Tuesday April 10 1945 at the age of 30 during the battle of Deventer. He was temporarily buried in Oxe near Deventer and was reburied on December 17 1945 in Holten.
At his headstone: Loved in life And not forgotten
His Medals were: 1939-45 Star; France Germany Star; War Medal: CVSM & Clasp. 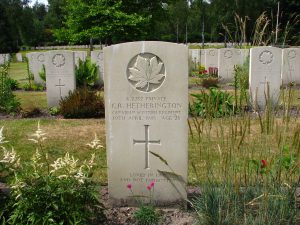