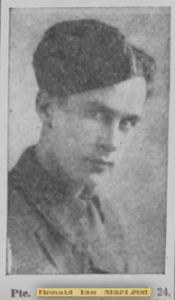 Donald was born on June 9 1920 in Victoria British Columbia as the son of John and Mary MacLeod (both Scottish). His parents were married on March 1 1918 in Scotland. His brothers were John J. and Alastair Angus (also army overseas) MacLeod .
He was a ship’s steward and member of the United Church.
He enlisted on September 20 1939 in Victoria and he went on October 20 1941 overseas to the UK and he went thereafter on June 11 1944 to France. He was seriously wounded in action on June 14 in the C Coy during the battle of Putot en Bessin and was then evacuated by air to a hospital in Taplow UK.
Donald died of wounds there on Thursday August 3 1944 age 24 and he was then buried at the Brookwood Military Cemetery.
His medals were: 1939-45 Medal; France Germany Medal; Defence Medal; War Medal; CVSM & Clasp. 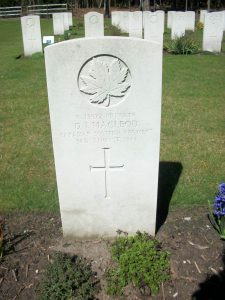