Douglas was born on August 7, 1924 in Ashcroft, British Columbia as the son of Ervin Austin McDonald (American) and Hanna Blanche McDonald nee Botterill , of Robson, British Columbia. His parents were married on July 8 1922 in Kamloops British Columbia. He was the brother of Elaine Mae, Ruth Beatrice and James (Jim) Ronald McDonald.
Douglas spent the first 5 years of his life on the 2240 acre family ranch on Lac des Roches in the Cariboo district of British Columbia. The family then moved to Trail, Fruitvale and Robson in British Columbia where he also attended school in each place. His nickname was ‘Butch’ and Douglas loved the outdoors. He was athletic and a good worker. He liked to fish, skate and play hockey when there were enough boys to make two teams. Sometimes there would only be 4 or 5 boys on a team — but, they would enthusiastically play hockey. He spent hours by himself practicing shooting pucks into a goal. Since this happened in small towns in the 1930’s and early 1940’s, all skating was done outside either on a large creek or on a home-made ice rink. Douglas also loved to box, which he started when he was about twelve years old. He enjoyed playing badminton and softball and helping care for the farm animals and chickens. When he was seventeen years of age, he built a small, one-room ‘log cabin’ using small trees about 2 1/2 inches in diameter. He even built a ‘pole’ roof for his cabin. He did all the work himself with instructions from his father. He showed himself to be an industrious young man, his death was obviously a great loss to his family and the community.
He was a labourer and member of the Roman Catholic Church.
He enlisted on August 5 1943 in Vancouver and he went overseas to the UK on March 15 1944 and he went thereafter as reinforcement on June 10 to France.
Douglas was killed in action on Tuesday August 15 age 20 in the D Coy near Falaise and he was temporarily buried 2 km’s East of Soulangy and reburied on May 17 1945 in Bretteville S/Laize.
At his headstone: HE GAVE HIS LIFE FOR OTHERS. EVER REMEMBERED BY MOTHER, DAD, ELAINE, RUTH AND JIM
His medals were: 1939-45 Star; France Germany Star; War Medal; CVSM & Clasp. 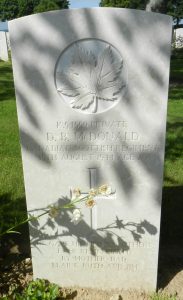