Edward was born on January 15 1912 in Nelson British Columbia as the son of Edward John and Emma Caroline Shardelow (both English and deceased), of Nelson. His parents were married in 1903 in Montreal. His sister was Emma Mary Iaonin nee Shardelow and she also was his next of kin. And his brother in law was Mr. Alexander Tariare.
He was a garage owner and member of the Church of England. His interests were swimming, hockey, skating and fishing and his hobbies also were woodwork and reading.
He enlisted on October 14 1942 in Trail British Columbia and he went overseas to the UK on December 21 1943 and he went thereafter as reinforcement to France on June 9 1944.
Edward was killed in action on Tuesday August 15 age 32 near Falaise and he was temporarily buried near the Assy road to Rouvres and reburied on March 27 1945 in Bretteville S/Laize.
At his headstone: HERE HONOUR COMES, A PILGRIM GREY TO BLESS THE TURF THAT WRAPS THEIR CLAY.
His medals were: 1939-45 Star; France Germany Star; War Medal; CVSM & Clasp. 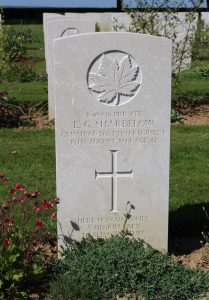