Emile was born on 31 Oct 1920 at Dauphin, Manitoba, as the son of Auguste and Stephney Soens, of Brighouse, British Columbia.

He was working as a truck driver in the Kamloops area of BC when he volunteered for active duty and was assigned to 1 C SCOT R in Victoria BC. He served with the unit in Canada and arrived with it in the UK on 2 Sep 41, His training and service continued in the battalion

Emile as a member of the flame-thrower section of his platoon was killed in action on Saturday April 1945 age 24 during the first attack for the liberation of Wagenborgen. He was temporarily buried in Groningen and he was on February 13 1946 reburied in Holten.

He may also have been there because he had some fluency in the Dutch language.

At his headstone: JUST AWAY 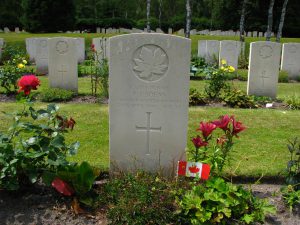