Ernest was born on April 8 1912 in Brighton England as the son of Alfred and Catherine Annie Phillips of Revelstoke British Columbia. His parents were married on December 25 1904 in Brighton. He was married with Iris Phillips of Brighton. His brother was William Alfred Phillips and his aunt was Mrs. Albert Wilson.
His profession was a truck driver and he was member of the Church of England.
He enlisted on March 27 1941 in Revelstoke and he went overseas to the UK on October 9 1942 and he went thereafter to France on June 6 1944 for the D-day landing. He was as a stretcher bearer seriously wounded there.
Ernest died of this wounds thereafter on Sunday June 11 age 32. He was temporarily buried in Graye S/Mer and reburied on December 12 1944 in Beny s/Mer.
His medals were: 1939-45 Star; France Germany Star; Defence Medal; War Medal; CVSM & Clasp. 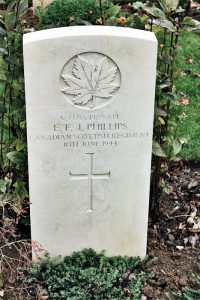