Ernest was born on June 18 1923 Chu Chua British Columbia as the son of Chief Alex Thomas and Lucy Thomas nee Fortier, of the Kamloops Indian Reserve. There is also written in his service file another name for his mother Mrs. Rosey Thomas. His brothers were Lawrence, James and Clement Philip Thomas. His sisters were Marjorie, Madeline and Margaret Mary Thomas and his two already deceased sisters were Josephine and Rose Marie Thomas.
He was a farmer and member of the Roman Catholic Church. He has done hunting, fishing and trapping. He liked playing pool and some baseball and some dancing but reads not much.
He enlisted on December 26 1941 in Kamloops and he went overseas to the UK on June 24 1942 and he went thereafter on June 6 1944 in the first assault wave to France during the D-Day landing.
Ernest was killed in action on Saturday July 8 age 21 in the C Coy near Cussy and he was temporarily buried there and he was reburied on February 7 1945 in Beny S/Mer.
At his headstone: OUR BELOVED SON ERNEST. HE WILL NEVER BE FORGOTTEN BY HIS DAD AND MOTHER
And his medals were: 1939-45 Star; France Germany Star; Defence Medal; War Medal; CVSM & Clasp. 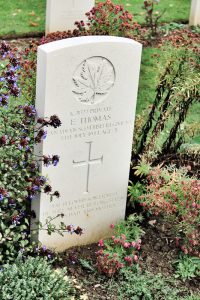