Ewalt was born on April 27 1917 in Symara Siberia Russia as the son of Gottlieb (deceased in 1939) and Anna Rosella Brandt. He was married on November 15 1939 in Stettler Alberta with Herta Mae Brandt, of Vancouver. They had a daughter Connie B. Brandt.

His profession was a plasterer and he was member of the Lutheran Church.

David was killed in action on Saturday June 10 age 27 in the B Coy near Putot en Bessin and he was temporarily buried near Norrey and he was reburied on May 3 1945 in Beny S/Mer.

At his headstone: IN LOVING MEMORY OF EWALT A DEAR HUSBAND AND DADDY. EVERY DAY IN SILENCE WE REMEMBER. SADLY MISSED BY HIS LOVING WIFE AND DAUGHTER CONNIE 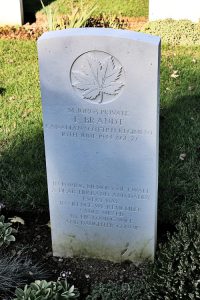