Francis was born on May 11 1914 in Cookstown (Ireland) as the son of John and Sarah Jane Logan. He was married on February 3 1943 with Julia Emma Anne Logan nee Knechtel, of Grande Prairie, Alberta and they had a son John Richard Logan. His brothers were Hugh Joseph, John (in the army too), Mark (RCAF overseas too), Augustus Michael, Charles Malachi (in the army too) and Leo Patrick Logan. His sisters were Mary Elizabeth Nadeau, Theresa May and Kathleen Jean Logan.
His profession was a truck driver and he was member of the Roman Catholic Church.
He enlisted on July 4 1942 in Edmonton and he went overseas to the UK on September 20 1943 and he went thereafter to France on June 6 1944 for the D-Day landing.
Francis was killed in action on Friday July 16 age 30 in the Sp Coy near Caen and he was temporarily buried near a ‘Fabrique des meubles’ and he was on April 10 1945 reburied in Bretteville.
At his headstone: ON HIS SOUL SWEET JESUS HAVE MERCY. MOTHER OF PERPETUAL HELP PRAY FOR HIM. R.I.P.
And his medals were: 1939-45 Star; France Germany Star; Defence Medal; War Medal; CVSM & Clasp. 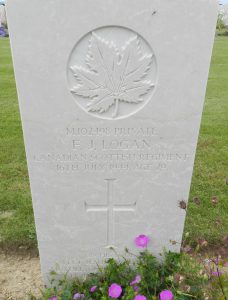